Kristina Lachaga. It's how she stood out in the crowd and became "The Girl With The Big Pink Heart™."

You don't always have to sit front row, center stage to be noticed by your pop star idol! Sitting on the sidelines at the top of Level I, two sections from the stage, a girl holding a big heart was spotted by Justin Bieber. With his now over 2 billion views of his iconic song "Baby," Justin had picked that bubbly girl with the Big Heart (pink to be exact) to be his "Baby" as he closed the show in Trenton, NJ on June 24th, the second concert date on his My World Tour in 2010. Little did he know that this girl, Kristina Lachaga (later to be dubbed "The Girl With The Big Pink Heart™" when leaving the concert by all of Justin's envious fans), was also following her heart's dream. His recognition from the stage made her determined heart flutter just that much harder and faster. 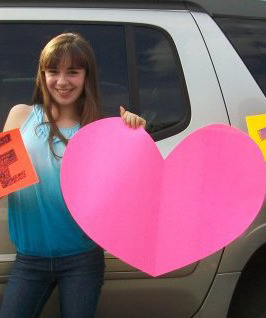 Kristina has performed on stage since the age of 3, always taking things in stride, even at such a young age. Stage fright? Never a bit. She thinks of that as a foreign concept. Nervous? No, just always excited to set foot on the next stage, where she comes alive and charms her audience with her sparkle and pizzazz! Kristina takes advantage of every opportunity that comes her way and sees each of them as another "Baby" step to a fulfilling entertainment career. She never presumes or expects and always works hard at her craft to achieve her goals. Her heart-warming personality just makes you smile, you know, the kind that lights up a room.

She has been following her heart's dream, committing seriously to studying voice, acting, and dance in New York City since she was 9. Kristina, at age 12, booked the role of Baby Louise on the 2007-2008 National Tour of the Broadway Musical "Gypsy" and brought smiles to audiences in 47 states and Canada for 9 months. Not long after the tour, she began writing her own songs and transitioned into Pop music. Kristina has released five singles on iTunes and is currently working on her first EP. With her sincere, honest delivery of lyrics, Kristina can be described as "cute and edgy," with her vocal ability able to cover multiple genres. 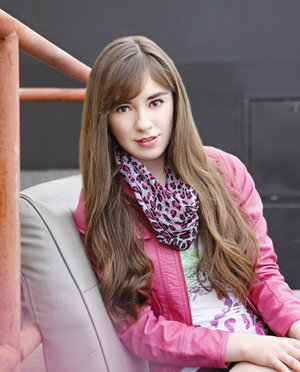 Kristina Lachaga has a "happy, go lucky" attitude towards life. But don't be fooled, this girl had her share of middle school bullying for just doing what she loves and for being who she is - a girl with one of the biggest heart's a person could have. She proves every day that dreams are possible with a little luck, a lot of talent, and a great big heart.

Her story? She owes Justin Bieber for some of it, but the truth is that Kristina has and always will have a Big Heart and she always opens it up to her family, friends, and of course, her fans (aka her #Heartbreakers). She puts her heart into each and every song. Her music will definitely make your heart skip a beat!